Undercover customs investigator regularly go looking for narcotics at Munich Airport. Couriers are getting ever more creative in how they hide their drugs, but the investigators have an unerring ability to find them out.

The plane from Amsterdam arrives early in the morning. While it rolls across the apron, a small group gets into position around the boarding bridge to welcome the arriving travelers. Reinhold Ott*, a large, athletic man with glasses and short grey hair, casts his eye over the people standing around and observes: Two of them have a suitcase, one woman has a travel bag, a man swings a backpack onto his back. To all appearances they are completely normal passengers. But in reality they are undercover investigators.

A second group comes around the corner. Its members wear green uniforms and vests emblazoned with “CUSTOMS”. Those in uniform exchange greeting with those in plainclothes: “Good morning, good morning”. Reinhold Ott is a customs official and a member of the plainclothes surveillance group. Together with 80 co-workers, men and women, from the customs office, he works at Munich Airport, not looking for undeclared goods, but for drug smugglers.

This is because couriers try to bring most of their drugs into the country by plane. At Munich Airport alone, officers of Munich’s chief customs office seized 114 kilograms of narcotics in total in 2020. In 2019 the number was 414 kilograms. The most commonly smuggled drugs are cocaine, ecstasy and khat, an African plant with an intoxicating effect.

The plane from Amsterdam has reached its park position. A young customs investigator stands directly in front of the passenger bridge. His name is Nando, a German Shorthaired Pointer, on a leash.

He and his fine nose will be helping investigators in their inspection today. The passengers leave the plane by the bridge and walk into the terminal. A few look askew at the uniformed officers as they pass, but they barely seem to notice the plainclothes investigators. This gives Reinhold Ott and his co-worker, Chief Customs Secretary Norbert Merk*, the chance to take an even closer look at the passengers hurrying by. “You make a decision for or against someone in a matter of seconds,” explains Ott. In the end, they intercept a man travelling alone. He is asked to show his ID and answer a few questions.

“We’re on the lookout for anything that isn’t right, the smallest discrepancies or anomalies,” says Norbert Merk. “If someone’s wearing old sneakers with what looks like a new suit, that’s odd. If we ask someone why he has flip-flops and he starts to stammer, something’s up.” The man they’re talking to now has three phones with him, but these high-end smartphones don’t look right on him. That’s why Merk noticed him. In the control area, he is asked to open his suitcase, but the two investigators find nothing. And the rapid test reveals no trace of narcotics. The man is allowed to continue on his way.

“With a dog’s fine nose we would have known right away,” says Ott, giving a pat to Nando, who has just been sniffing out other passengers. On duty, the sniffer dog breathes in and out again several hundred times per minute – inspections are much more stressful for him than for his handler. That’s why he gets to take a break after every case.

A young woman pushes past Nando – and he reacts in less than a second. He is trained not to bark, but instead to sit down immediately when he scents narcotics. His work here is done. Now it’s up to his human partners. But this time it was just a test: The presumed smuggler is a customs worker with a decoy in her bad. “The dogs need to experience success and be rewarded for their work in order to keep them motivated,” explains Ott.

Marijuana in the tea caddy

Without the assistance of the sniffer dogs, customs investigators would have an even harder time, because couriers are constantly thinking up new methods of smuggling forbidden substances into Germany. Crystal meth disguised in candy wrappers, cocaine in wheelchair tires or marijuana in tea caddies – there’s hardly any hiding place that Ott and Merk haven’t seen before in the line of duty. Norbert Merk’s most bizarre case is already some time ago. But he still remembers it exactly: “We were checking a plane that had come in from South America. I noticed a passenger who was acting very jittery. We had a quick word and asked her why she was coming to Germany, but she couldn’t give us any reason.” Then we conducted a thorough search of her luggage but came up empty-handed.

“I had a feeling that something wasn’t right, but we simply couldn’t find anything,” tells the Chief Customs Secretary. “We were this close to letting her go on her way when one of our colleagues noticed a rustling sound coming from her hair.” Closer examination revealed an incredible discovery: The woman was wearing a wig with unnaturally lush, full hair. In total, she had half a kilo of cocaine plaited into her hair.

In such cases, there can be no substitute for customs officers’ instincts and experience. As they can’t check every plane that lands in Munich, the plainclothes surveillance group makes its picks at random. It pays particular attention to flights from countries known as potential drug trafficking hotspots, such as South America and Africa. “We don’t have profiles or patterns that we can rely on. There’s no such thing as a typical courier. We could also decide to check every fifth person who comes along, but when you’re looking for drugs a lot of it has to do with simple intuition,” says Ott. “It’s like looking for a needle in a haystack – and sometimes success comes down to just a feeling.”

*Names have been changed

Suddenly, we heard a rustle coming from her hair. 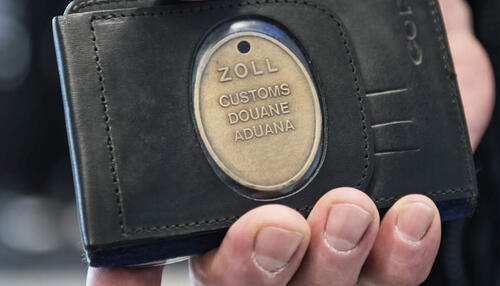