Due to the global coronavirus pandemic, international air and travel traffic is currently still restricted. Munich Airport has implemented numerous hygiene measures to ensure that passengers and guests can travel safely and have a comfortable stay during these times. In addition, the Bavarian authorities have set up corona test centers at Munich Airport.

Please check the current flight displays for your check-in, departure and arrival areas. Please arrive at the airport early as there may be a longer check-in or waiting time due to corona regulations.

Before departing for Munich from a high-risk or virus-variant area, please refer to the currently applicable transport and/or entry regulations. For example, travelers from a virus-variant area must prove either residence in Germany or an urgent reason for entry, otherwise they will be refused entry.

From this storm season, Airport Operations is no longer issuing lightning warnings solely through communication channels such as radio, telephone or e-mail. An additional audiovisual alarm system increases safety for apron staff that do not have a telephone or radio close by – or simply do not hear them.

When operations assistant Christian Langer sits at his desk in the Airport Operations Control Center, he is not only interested in the movements of aircraft and vehicles on the apron. He and the other operations assistants always keep an eye on how the weather is developing as well – especially in the summer months. This time is high season for storms, especially this year: In June 2021 alone, there was thunder and lightning at Munich Airport on 14 days, and they occurred with roughly the same frequency in July, too. Each time, this poses a danger to everybody who works on the apron.

“It is part of our duties to issue warnings as soon as storms approach,” explains Langer. To that end, he and his colleagues monitor the weather patterns around the airport using special software: In what direction is a storm cell moving and at what speed? Where will the first lightning strikes hit and with what density? They are assisted by the German Weather Service, which issues an initial storm warning as soon as lightning activity is registered within 20 kilometers. Airport Operations shares this with airlines, the fire service and other partners by e-mail and telephone and publishes it in the UDS monitor system. When there are lightning strikes within ten kilometers of the airport, the same group of recipients is sent a preliminary warning for lightning.

It is part of our duties to issue warnings as soon as storms approach. 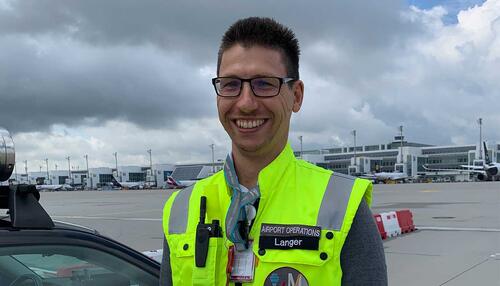 “From a distance of five kilometers, ‘Lightning Warning Red’ follows,” says Langer. In this case, he has work to do to inform all of his colleagues and warn the apron staff. Airport Operations has always used various media, including radio, telephone and e-mail, for this purpose. Now Langer or his colleagues also press a newly added red button in the event of an alarm. It triggers an audiovisual storm warning system that is also intended to reach all those who do not carry a smartphone or radio with them or simply do not hear such devices.

The system has been installed on 70 lighting masts on the apron and comprises red horns with integrated lights in each case. As soon as it is triggered, a horn sounds for 15 to 20 seconds and a red light flashes. For the personnel on the apron, that means they should all take shelter for their own safety by heading for buildings or vehicles.

This situation ceases only when Christian Langer or another member of Airport Operations presses another new button on their desk. This one is green and terminates the “Lightning Warning Red,” allowing everybody to return to their work.

Lightning over the airport